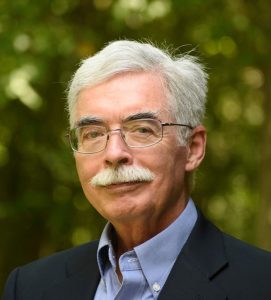 The Reverend Dr. Wesley F. Brown is the director of faith communities programs at moss+ross. He joined the firm in 2017 following retirement from a 36-year career in fundraising with the Divinity School at Duke University.  His work there involved every aspect of external relations and development, ultimately focusing on major philanthropic projects and planned giving.

As an ordained elder (retired) in the North Carolina Conference of the United Methodist Church, his first vocation was service for five years as a pastor in both urban and rural churches prior to his appointment to Duke in 1981.  He was a trustee for nine years with The Alban Institute, an organization dedicated to strengthening faith communities, based in Washington, D.C.  He is an adjunct faculty member teaching annually with the Lake Institute on Faith & Giving, Lilly Family School of Philanthropy, Indiana University.

A native of North Carolina, Wes was educated at Methodist College (B.A.) and Duke University Divinity School (M.Div.). He was honored for his work in philanthropy with the honorary Doctor of Divinity degree by Methodist University in 2001.

Wes and his wife, Jane, enjoy the occasional company of two adult sons, a daughter-in-law, a granddaughter, and a grandson.

Fun fact: Wes has been privileged to know Mary and Susan since the early 1980s when all three worked at Duke.