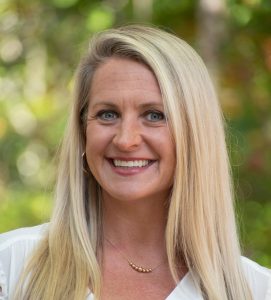 Liz Wilkerson joined moss+ross in May 2022 in the interim solutions division where she immediately began helping with executive searches. She has assisted with searches for the United Way of North Carolina, Habitat for Humanity Wake Co, and North Carolina Advocates for Justice.

Liz earned two undergraduate degrees from the University of North Carolina at Chapel Hill in History and Journalism and Mass Communications. She has a background in banking and cost analysis, where she worked closely with many non-profit organizations.

Liz, a native of Greensboro, has lived in Raleigh since 2000. She has two children and two yellow labs, Louie,and Disco. Liz enjoys volunteering in the community with her children and is an active member of National Charity League with her daughter, Ellis, and Boys Team Charity with her son, Holt.

Fun Fact: Liz is an avid runner and runs with her dogs every day! She also enjoys cooking, reading, spending as much time as possible at the beach.